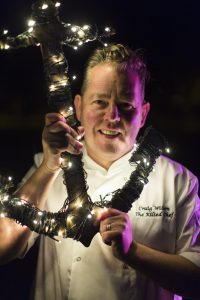 Born and bred in the north east, Craig is a proud father to Zak, Yasmin, Jay and Yara.  His passion for food began at the age of 16, when he started out as a trainee chef at the Strathburn Hotel in Inverurie.  Leaving his rural roots behind, Craig moved to Perthshire to work at Ballathie House Hotel, before taking the job as head chef at one of the finest luxury hotels in Scotland, Cromlix House, at the young age of 24.  This led him to become one of the youngest head chef’s in the country and also one of the youngest chefs to achieve 2 AA rosettes for his culinary skills.

Inspired to open his own restaurant, serving high quality food using the finest local ingredients, Craig returned to the north east and Eat on the Green was born.  Craig has received wide recognition both from loyal guests who return time and time again and from local and national industry awards.  He is supported by a conscientious and talented team, who consistently deliver on his high standards of food and service.

Craig has been honoured to cook for many high profile celebrities including Sir Sean Connery, Sir Alex Ferguson and Sir Patrick Stewart. In 2014, Craig was selected by VisitScotland to travel to New York as an ambassador for Scotland’s food and drink, as part of Scotland Week.

A committed supporter of cancer related charities, in the last two years Craig has raised in excess of £250K through various challenges, food demonstrations, fundraisers and events. Friends of Anchor is also the restaurant’s chosen charity, a cause which is extremely close to Craig’s heart. Sharing his passion for food and inspiring others to eat healthily, using the best local produce – Craig writes for Trend magazine, Raring to Go and regularly hosts demonstrations for local community groups and schools.